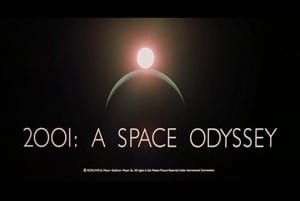 2001: A Space Odyssey (1968) arose out of the collaboration of Stanley Kubrick, clearly one of the most accomplished directors of the American cinema, and Arthur C. Clarke, one of the most renowned science fiction writers of our time (who passed away on March 19, 2008, at 90 years of age). Arthur Charles Clarke was born in Minehead, western England, on December 16, 1917, the son of a farmer. Among Clarke’s main influences were H. G. Wells and Olaf Stapledon (the author of long cosmic histories stretching to the very far-future). The year 1968 – which has been considered by many as one of the most crucial years of modern history — was also an extremely rich year for science fiction movies, including, for example, the original Planet of the Apes.

2001: A Space Odyssey remains to this day one of greatest science fiction movies ever made. Its concepts, special effects, cinematography, and nearly everything connected to it, were incredibly pioneering, groundbreaking and unprecedented. It was one of the first truly intelligent American science fiction films – after decades of mostly b-grade schlock in that genre. It was indeed a highly intellectual movie, which required the intelligent engagement of the viewer.

The beginning of the movie, set in deep prehistory, among the “ape-men” who are on verge of human consciousness, may bring forth varied reactions. At the beginning, the life of the “ape-men” is portrayed as difficult, but with an element of love. At one moment, we see a sort of Nativity scene, with father, mother, and child. Love therefore exists before the arrival of “the monolith” – which may be variously interpreted. “The monolith” does indeed bring increased intelligence to the “ape-men” – but also hatred. It may be noted that the “ape-men” who begin to use tools (that is, pick up large bones of animals in their hands), maliciously block the way of another group of thirsty “ape-men” who wish to drink from the stream, and that the first murder or possibly even genocide is carried out by the “ape-men” of increased intelligence. The famous music of Richard Strauss’ Also Sprach Zarathustra (Thus Spake Zarathustra) (inspired by Nietzsche’s groundbreaking philosophical work) may confirm the idea (somewhat related to that of Nietzsche’s) of the link between reason, “evil”, and technology – all of which represent the Nietzschean “will to power”. Representing the leap of millions of years, the large bone thrown into the air is transformed into a spaceship, taking us immediately to 2001!

Some of the ideas possibly suggested by the prologue would seem rather problematic for a professedly traditionalist outlook. First of all, it suggests the inevitability of corrosive technological progress. Secondly, it moves the period of so-called “organic life in love” – the presumed aim of neo-traditionalist vision — to such an early, virtually pre-human time. Should one really accept the idea that homo sapiens is a creature of prey – and nothing more? Is the seeming indictment of technological progress actually meant to be a scathing criticism of Western civilization, along the lines voiced at that time by persons like Susan Sontag?

The actual world of 2001 is shown in incredible detail. There still exist “Cold War” tensions between America and Russia, which have now also been transferred to the Moon, where there are already large bases. The ability to portray and represent in great detail, how life in space or on the moonbase might look like, is a very strong aspect of the film. One example of this attention to detail is a white male astronaut glancing at an issue of Playboy of that year (which actually drew the hackles of feminist critics). Interestingly enough, the presence of white males in the film’s portrayal of the world of 2001 appears to be considerably more prominent and accentuated than has become the case in our own 2001 and subsequent years.

One notable feature of the movie is the almost ballet-like portrayal of spaceships in flight, accompanied by stirring Western classical music.

The third part of the movie shows the trip of the spaceship and its three-man crew in the direction of Jupiter. It is very realistically portrayed – so far from the more-or-less “fantasy” depictions of space travel in Star Trek and (especially) Star Wars. There begin problems with the Artificial Intelligence computer, which (or who) is guiding the ship…

The fourth part of the movie is a phantasmagoria of surrealism, which allows for very varied interpretations. Some interpret it as essentially the union of human beings with God, which ends with God coming to earth, in the form of the Star Child. However, it does not seem like a vision that would conform to most interpretations of the major human religions.

In 1953, Arthur C. Clarke had published a novel, Childhood’s End, which enunciated a rather cold, bleak vision of humanity’s children becoming part of a cosmic super-mind, while the despairing adults essentially commit suicide (any further children born would also have become members of the super-mind). Clarke maintains a studied ambivalence whether this development could simply be considered as humankind’s evolutionary destiny, or something rather more monstrous.

Certainly, it is possible to see a considerable ambivalence about “the monolith” in the movie.

It is interesting that Clarke was a Distinguished Supporter of the British Humanist Association, and a life-long skeptic about religion. While a brilliant speculative thinker, Clarke’s understanding of the role of religion in history was a bit thin. For his funeral, he had given the instruction:

“Absolutely no religious rites of any kind, relating to any religious faith, should be associated with my funeral.” One of his most famous statements was: “The greatest tragedy in mankind’s entire history may be the hijacking of morality by religion.” It may be that this statement shows to what extent Clarke was centered on a scientific outlook, with comparatively little understanding of the way human history has actually unfolded. It seems that – while actions of considerable evil can be ascribed to religion — at almost every point in human history, the better forms of human behavior (insofar as they occurred at all) were to a large extent also grounded in some kind of religious basis. Nevertheless, the statement shows that Clarke believed there are some behaviors that are more truly ethical than others, hence he is absolutely in favor of a certain ethic that is not just pure selfishness and pleasure-seeking at the expense of others. Thus, it could be argued by a defender of Christianity, that Clarke, after all, partakes in an ethical outlook that became possible only after Christianity had taken hold in Europe for a number of centuries, and had to some extent “humanized” persons away from merely unceasingly seeking power and pleasure for themselves.

In one of his most famous short stories, “The Star” (1955) Clarke raises the disturbing quandary for a religious believer that an entire alien civilization may have been wiped out by a supernova which produced the Star of Bethlehem that heralded Christ’s birth. At the same time, the story brilliantly foresees the anguish that arises around the issue of abortion for Christians living in technologically-advanced societies that have done away with any kind of prohibitions on what becomes considered by most a routine medical procedure.

Arthur C. Clarke was able to engage vast speculative faculties in regard to various technological possibilities. His scientific article in 1945 presaged communications satellites in geo-synchronous orbits decades before it became practically possible. He was also at the cutting edge of speculations in regard to the possible eventual transfer of human consciousness into electronic and machine form, suggesting that this was probably the only way that human beings could achieve millennial lifespans. He believed that such a transfer into electronic and machine form was probably the main direction of continuing human evolution. It’s made clear in the book associated with the film that the Monoliths are exactly such beings, i.e., the conclusion to a long process of evolution by an ancient alien race.

One might also note here that the movie was partially based on several of Clarke’s earlier short stories, including “The Sentinel” (1948) and that Clarke was rather unhappy that the movie came out before the book, thus effectively making the book a novelization of the film, something which Clarke to some extent blamed on chicanery on the part of Kubrick.

The book also makes explicit that the computer’s “breakdown” arises out of the demands of secrecy imposed by the mission to Jupiter. This could be considered a criticism of the so-called “national security state” and its prerogatives and priorities.

About the best-known statement by Arthur C. Clarke is that „…any sufficiently advanced technology is indistinguishable from magic.” There are indeed many interpretations one could put on this phrase, ranging from something like the fact of the putative enslavement of most human beings to technologies of which they have no understanding; to something like a suggestion that humankind’s powers can be almost infinitely extended through technology.

In 1989, two decades after the Apollo 11 landings, Clarke wrote: “2001 was written in an age which now lies beyond one of the great divides in human history… Now history and fiction have become inexorably intertwined.”

Clarke’s simple tombstone in Sri Lanka (formerly called Ceylon) (a country where he had lived for decades, partly for reasons of convalescence from his bout of polio in 1959) reads: “Here lies Arthur C. Clarke – he never grew up and did not stop growing.”