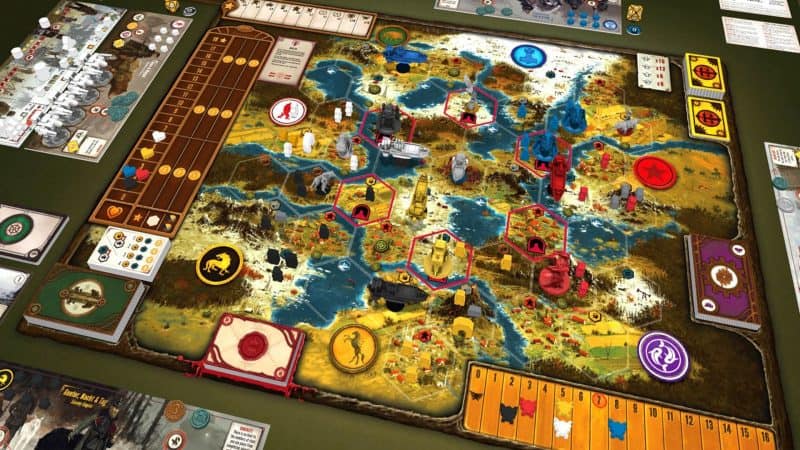 This magazine and game somewhat ironically appeared in the month when the democratic process was supposedly going to deliver a major change in the direction of the American polity – the election of a Republican majority in the House of Representatives, as well as the Senate, with Newt Gingrich becoming the Speaker. However, as has so often happened since the 1960s, the promised (or feared) putative “conservative revolution” never really took place. As far as social and cultural matters, things rolled on as they did before, and Bill Clinton easily won re-election in 1996. However, one of the ironies of the Clinton presidency was that he balanced the federal budget, introduced restrictions on welfare, and did not get in the way of the economic recovery of the mid to late 1990s.

GameFix/Competitive Edge had originally marketed itself as producing „wargames for people who don’t like wargames”. The conflict simulation games they had offered with every issue of their magazine were deliberately designed to be simple to play (at least by the usual wargame standards), and to be relatively quick and easy to finish (often less than an hour). GameFix/Competitive Edge had also intended to feature non-military games dealing with mountain-climbing, various major-league sports, etc. Since the beginning of the Twenty-First century, the publication schedule of the magazine had slowed to a crawl, as the company was doubtless going through difficulties.

In tune with the aimed-for simplicity, Crisis 2000 has a map of the U.S. consisting of 14 regions in total. They are of three types — metroplex, developed, and wilderness. (The numerous black dots representing cities and military bases play no role in the actual game.) There are also 3 boxes on the map representing U.S. overseas deployment areas. The game has a hundred counters, of which 55 represent military and political forces — „units”; 17 represent „infrastructures”; and 37 are „crisis” markers, used to augment the strength of one’s forces in different ways.

There are two notable things about the units/infrastructure counters — first of all, they are printed on both sides, showing the same formation (e.g. High-tech Arms division) in different colors, on different sides of the counter. This economizing measure is useful in terms of indicating immediate „defections” of military and political units as well as infrastructures to the other side, which is one of the main aspects of so-called „Data Conflict”. Secondly, the units have two values apart from their movement allowance, their ratings for „Data Conflict” and for „Armed Conflict”. There are special rules for certain units, e.g., the „Cybernauts” usually cannot be attacked through „Armed Conflict”, as they are presumed to be clandestine, while federal police forces can in some circumstances use their higher „Armed Conflict” rating against the „Cybernauts”. Ultimately, however, the game often simply amounts to „move in with your units and try to bash your opponent”, although the use of randomly-drawn „Crisis” markers to weaken your opponent or augment your own offensive, is critical to success. (The three numbers on a typical Crisis marker represent its conflict-augmentation values when committed to metroplex, developed, or wilderness regions, respectively, for Data or Armed Conflict.) The more combat and political forces are committed to a given battle, the greater the chance of „Collateral Damage”, which impacts on the winner of the battle as well.

The magazine’s background material to the game is highly interesting (pp. 6-8, 22-24), although written from a very libertarian slant. It is a good beginning for speculations about possible future civil conflicts in the U.S., and for further analysis of the sociopolitical impact of the Internet. Game designer Joe Miranda points to the „Clipper Chip” controversy — the attempt to create a microchip standard for all e-mail encryption, that would also allow for the decryption of all electronic messages through special „keys” held by government agencies. (The „standard” in 1994 was a plethora of commercially-available encryption programs, which – it was believed at that time – were virtually inaccessible to government monitoring.) Miranda also writes about Operation Sun Devil, launched by the U.S. Secret Service in 1990. Among the targets was a gaming company, Steve Jackson Games, whose „cyberpunk” role-playing game — although dealing with fictional hardware and software — was considered to be so close to verisimilitude as to constitute a „how-to” guide. The company faced great difficulties as its computer equipment and files contained therein were impounded; however, it was eventually vindicated in court, while gaining great publicity on behalf of its products. One of the results of Operation Sun Devil was the formation of the Electronic Frontier Foundation, which is one of the chief groups fighting for near-complete freedom of communication on the Internet. (Although it itself has sometimes been criticized by more radical groups for neglecting its mission.)

The magazine also mentions a provocative article published in the Winter 1992-93 issue of Parameters, the U.S. Army War College’s journal, by Lt. Colonel Charles J. Dunlap, Jr., entitled, „The Origins of the American Military Coup of 2012.” The article’s main purpose appeared to be to critique what the author saw as the very deep cuts to the U.S. military, but especially to protest the increasing use of the U.S. armed forces for political ends, both at home and abroad. In the future, both these trends are seen as sapping U.S. morale and combat effectiveness, to the point where a major U.S. defeat in the Persian Gulf-area causes the military to turn against its inept political masters, supposedly cheered on by much of the civilian sector.

Among the eclectic mixture of other references listed are James Burnham’s 1941 political classic, The Managerial Revolution; and George Orwell’s Nineteen Eighty-Four (1949).

The game offers seven scenarios, with differing force-mixes for the two opposing players (unlike many political games like Diplomacy, this is strictly a two-player game).

Many of these scenarios are clearly rooted in a specifically American experience of the world. Although all of them point to identifiable social and political realities, the U.S. fortunately seems rather distant from any of these metamorphosing into an actual „shooting” civil war.

One questionable aspect of the game would be what could be seen as its huge overrating of the impact of „the Cybernauts” and Internet. The „Cybernaut” units should probably be re-interpreted as representing the media in general (or at least its most senior and activist persons). If a „Cybernaut” unit was seen as standing for a massive agglomeration of media-leaders, such as film producers and directors, key television network people, hundreds of newspaper, book or magazine publishers, and the best-known investigative journalists, as well as the Internet activists themselves, then such a projection of power would seem more warranted.

The merger of AOL with Time Warner in 2000 showed the hunger for “hard content” as part of a successful Internet strategy, albeit much of what Time Warner offered then and today is, admittedly, so-called “mere entertainment.” Nevertheless, that merger proved to be a disaster, mainly due to serious missteps by AOL – and the combination of the “high-tech bust” and the impact of “9/11” in 2001. Very many people today, however, fundamentally live and define themselves by their varied entertainments. And much of entertainment today carries obvious social and cultural messages.

It could be argued that another game inaccuracy is the zero ratings of military units in „Data Conflict”. While the military might find it difficult to initiate political struggle, they are certainly among the most cohesive groups in society. Propaganda might degrade a military unit somewhat, but never to the point where it comes over to another side, with fully intact combat and movement capabilities. It would probably „break” completely before changing sides. The strengths of irregular fighting formations also seem rather overvalued in relation to disciplined, cohesive military units, with heavy equipment.

It could be seen that the onset of a period of high prosperity and low unemployment in the mid to late 1990s, put to rest the dangers of major upheaval in the U.S. “9/11” plunged the U.S. economy into a tailspin – which George W. Bush tried to counteract by stimulating the construction industry. At the same time, the wars abroad, especially in Afghanistan and Iraq, proved highly costly, and, particularly in Iraq, disastrous – rather than leading to the hoped-for, more positive evolution of events. There followed financial malfeasance when low-grade mortgages were touted as high-grade investments, and passed off to banking institutions around the world.  Since about 2008, the U.S. economy has been in near-permanent crisis. It could be argued, however, that the developments in social and cultural matters are also very troubling. Indeed, the U.S. continues to be engulfed by a series of bitter and highly divisive “culture wars.” These certainly exacerbate the impact of the economic crisis.

Insofar as the normal democratic process of change is not given an opportunity to take place — with a Republican Party that is mostly too timid to oppose the current-day Democratic Party excesses – or with certain policy options, such as foreign policy non-interventionism, or lower immigration — ferociously opposed by the “deep state” — a frustrated electorate might begin contemplating ever more radical solutions – such as the arising of a major third party, or even the threat of secession among some states.

# 3: Chicken of the Sea: Naval Warfare During the Punic Wars (Rome vs. Carthage)

# 11: Cybernaut: The Duel for Cyberspace

In #13, Joe Miranda’s Neuro Predators: Hyper Reality — “a hex and counter boardgame pitting the military forces of a frightened empire against those of the cyber-chaos” — was announced for the next issue (#14). As far as the author of this article is aware, issue #14 has not appeared yet.