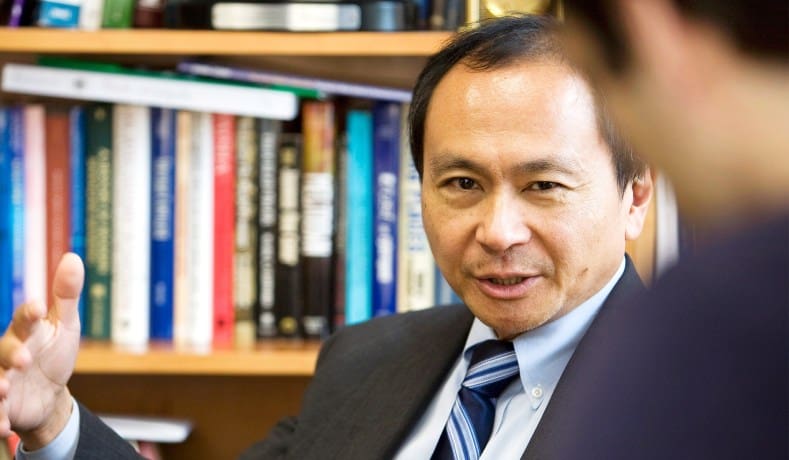 Initial drafts of this response to Fukuyama’s article go back to November 1989.

Francis Fukuyama, „The End of History?”

Fukuyama’s article has caught the attention of many persons who study political philosophy, and who are deeply interested in questions of what might somewhat over‑optimistically be called „the future of the West”.

Fukuyama’s article has been perceived as a daring éclat on „the end of history”, but certain aspects of these matters, it could be argued, have been fairly poorly represented in the debate. There is the lack of a perspective rooted in the writings of thinkers such as Martin Heidegger, George Parkin Grant, Friedrich Nietzsche, and Jacques Ellul. Fukuyama has not entered into much of a dialogue with these thinkers in his thesis.

Generally speaking, the thesis on „the end of history” has been received in two main ways: most persons, while embracing the foreseen triumph of liberal democracy and capitalism, have expressed greater or lesser reservations about its completeness and permanence; while others argued that socialism, for example, was still a worthwhile, viable alternative.

Professor Bloom received the thesis very warmly and celebrated the future triumph of liberal democracy (albeit tempered with a curious reference to the „fascist” threat). Considering how vociferously opposed Professor Bloom appeared to be, to many aspects of contemporary American life, in his coruscating Closing of the American Mind, his embracing of full‑blown liberal democracy seems somewhat odd.

It could be argued that there was, in Fukuyama’s original article, a good deal of ambiguity about the total triumph of the liberal democratic model, an ambiguity that few of his critics seem to have picked up on, or properly understood.

Indeed, there is a vast intellectual tradition of „the critique of modernity”, aspects of which might have also found their way into Fukuyama’s article. Rather than seeing history as an upward progression, Heidegger basically saw it as a regression -‑ from a primitive, primeval state of bliss to the modern, soulless, anomic world, with technology playing the role of „the serpent in the Garden”. In the late nineteenth century, Nietzsche wrestled with the problem of „the death of God” ‑- a God which man had killed ‑- and searched for a way out of the sterility and mechanism of the modern world. Already at the birth of the Enlightenment, Rousseau ‑- „the first Romantic” ‑- argued for primeval virtue over civilized reason, and criticized all forms of „progress”, in his famous Discourse on the Arts and Sciences.

In more recent times, Ellul has formulated a critique of the rise of modern technology (which might largely be equated with the rise of capitalism and liberal democracy), as resulting in a totalistic, inhuman, technological framework from which all other viewpoints and perspectives are excluded. George Parkin Grant lamented the triumph of the universal „empire of technology”, which, as he put it, „speaks with an American accent”.  Echoing the point Fukuyama made about Iran and other „developing” countries, Grant states that, „…modern civilization makes all local cultures anachronistic. Where modern science has achieved its mastery, there is no place for local cultures.”

On a more popular level, the dystopic possibilities of modernity are well‑expressed in Aldous Huxley’s famous novel Brave New World. Though some critics focus in on the biologically‑engineered caste system as a symptom of „corporate conservatism”, the essential point of Huxley, is likely much different. If, as Plato and Aristotle thought, each regime produces a certain predominant type of human being, then the predominant type of the Brave New World society is perhaps closest to (though not necessarily identical with) the modern, North American, liberal mass‑man.

It might be argued that „the end of history” really signifies „the end of meaning in history”, as suggested in this key passage of Brave New World:

„`You all remember,’ said the Controller, in his strong deep voice, `you all remember, I suppose that beautiful and inspired saying of Our Ford’s: History is bunk. History,’ he repeated slowly, `is bunk.’ He waved his hand; and it was as though, with an invisible feather whisk, he had brushed away a little dust, and the dust was Harappa, was Ur of the Chaldees; some spider‑webs, and they were Thebes and Babylon and Cnossos and Mycenae. Whisk, whisk ‑ and where was Odysseus, where was Job, where were Jupiter and Gotama and Jesus? Whisk ‑ and those specks of antique dirt called Athens and Rome, Jerusalem, and the Middle Kingdom ‑ all were gone. Whisk ‑ the place where Italy had been was empty. Whisk, the cathedrals; whisk, whisk, King Lear and the Thoughts of Pascal. Whisk, Passion; whisk, Requiem; whisk, Symphony; whisk…”

The point to be driven home is that anything resembling a premodern perspective, a meaningful memory of the past, and the slightest residue of a more authentic transrational stratum, is today being eliminated from North America and its global extensions. Therefore all history becomes „meaningless”, and history therefore „ends”.

It might also be pointed out that the Brave New World is a remarkably „pure” and „orderly” example of a „liberal” society. John the Savage’s inchoate argument against Brave New World is that it is „ignoble”, destructive of man’s real humanity, and he is forced to accept that „suffering, disease, death, and infirmity” is the price of being human. However, our current liberal democratic society does not seem to have this tranquil stability (however artificially arrived at) as its chief characteristic. Rather, it is riven with conflict and acrimony, and seems perpetually on the edge of disintegration. A „bill of rights” mentality, far from unifying society, has – according to its critics — transformed it into a litigious, selfish, and crime-prone collection of atomized individuals. Modern society is perceived as devolving into the „fevered city of sows”, to use the Platonic term, or an all‑too‑literal „war of each against all”.

The Brave New World society is one which has eliminated, through „socio‑technical” means, those problems of our society which are obvious to most observers: racial conflicts, a constipated legal system, burgeoning crime rates, ineffectual and corrupt politics, drug abuse, stubborn pockets of poverty, and pollution. Everyone is „happy”, at least at the superficial level -‑ while even that can hardly be said of present‑day civilization. (For example, surveys consistently indicate the unhappiness of most Americans with their jobs.) The actual end‑product of our current development, if unchecked, might be closer to the „gritty future” of Anthony Burgess’ A Clockwork Orange, or Ridley Scott’s Blade Runner scenarios, resulting in the so‑called „air‑conditioned nightmare” of near‑complete social and environmental collapse, rather than the sanitized Brave New World environment. The deeper point to be made is that, unlike Brave New World, our society today seems rife with genuine unhappiness, unresolved contradictions, and alienation ‑- possible catalysts for unexpected change.

The question might also be asked if „the end of history” means „the end of ideology” ‑- or the total triumph of one ideology, liberalism, at the expense of all others. George Orwell’s Nineteen Eighty‑Four is often cited as the primary „future nightmare”, in contradistinction to Brave New World. The triumph of liberalism appears to put a world such as that depicted by Orwell safely out of the picture. This is certainly true in that coercion and violence and artificial scarcity (typically, Nazism or Stalinism) are no longer used to enforce ideological conformity. But if we look more deeply at Orwell’s dystopia, we might see in it some traits it has in common with modern North America. We see that, in North America, a sort of ideological conformity -‑ an ideological conformity to liberalism ‑- is „enforced” through control of virtually all politically meaningful language and imagery (what Orwell called the B vocabulary), via the mass‑media and mass‑education systems. This level of normative and semantic control is, it could be argued, by far the most crucial -‑ „Newspeak is Ingsoc, and Ingsoc is Newspeak”.  Professor Bloom’s Closing of the American Mind could be seen as a brave act of resistance to such „thought‑control”, and his response to Fukuyama’s article appears quite baffling.

One of the most troubling points of Fukuyama’s article, it could be argued, was the overly simple, tripartite division into „fascist”, „liberal”, and „socialist” paradigms. This appears to have swallowed the possibility of legitimate rightist opposition to the excesses of liberalism, capitalism, and liberal democracy, by the characterizing of all such positions as „fascist”. Yet it is only in current-day society’s approach to what might be called the Ground Zero of world‑history that the vast spaces of what is conventionally called „the Right” can be shrunken down so brutally. After all, there are persons „on the right” who cannot even agree on first premises – for example — Thomists and Nietzscheans, Classicists and Romantics, „natural rights” theorists and historicists. To confuse things further, libertarians and defenders of pure liberal democracy are also often classified as being „on the right” ‑- and sometimes ‑- as in the case of the libertarians ‑- on the extreme right.

It is possible to concur with Fukuyama’s identification of Japan as a possible exception to the universality of the liberal democratic model. Japan seems to have been able to effectively „synthesize” Eastern values with Western technology, an interesting development in itself. The future of Japan will probably be a good indicator of whether such a „synthesis” is at all possible, or whether the Japanese are only now passing through the „nineteenth‑century”, work‑ethic‑centered, expansive phase of their history, and will eventually end up where the West is today.

There is appended at the end of this response to Fukuyama a brief, famous passage from Hegel’s Phenomenology. This passage seems to contradict the Hegel-as-interpreted-by-Fukuyama. Indeed, it sounds like a powerful critique of the whole modern enterprise -‑ the very opposite of a sanguine, progressive view of history as the triumph of reason and freedom, which some ascribe to Hegel.

One should ask Fukuyama a fundamental question: Is not the wish for the total triumph of enlightenment and of the extinguishing of darkness (i.e., of the irrational and the transrational in human nature), as completely unnatural as its opposite, the wish for total darkness?

It would appear that serious consideration of “the critique of modernity” and its various, highly philosophical exponents, was largely absent from the bold elaboration of the “end of history” thesis by Fukuyama.

Time was when man had a heaven, decked and fitted out with endless wealth of thought and pictures. The significance of all that is, lay in the thread of light by which it was attached to heaven; instead of dwelling in the present as it is here and now, the eye glanced away over the present to the Divine, away, so to say, to a present that lies beyond. The mind’s gaze had to be directed under compulsion to what is earthly, and kept fixed there; and it has needed a long time to introduce that clearness, which only celestial realities had, into the crassness and confusion shrouding the sense of things earthly, and to make attention to the immediate present as such, which was called Experience, of interest and of value. Now we have apparently the opposite of all this; man’s mind and interest are so deeply rooted in the earthly that we require a like power to have them raised above that level. His spirit shows such poverty of nature that it seems to long for the mere pitiful feeling of the divine in the abstract, and to get refreshment from that, like a wanderer in the desert craving for the merest mouthful of water. By the little which can thus satisfy the needs of the human spirit we can measure the extent of its loss.