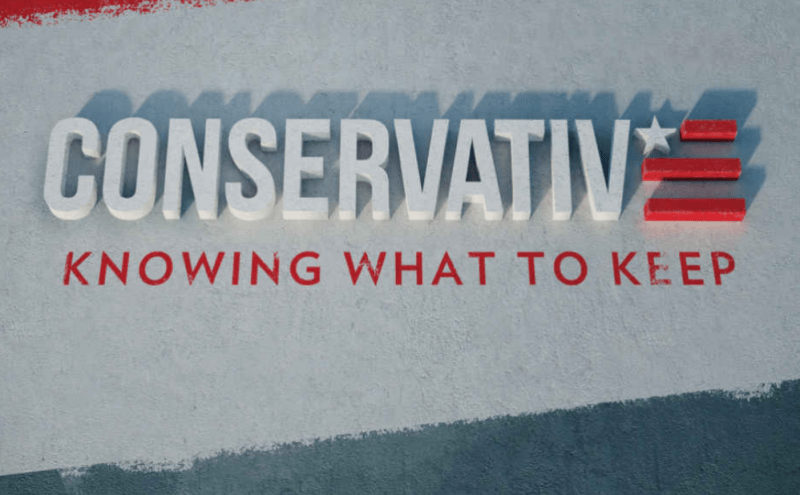 Conservatism today is, it could be argued, a bewildered philosophy -‑ an unwieldy morass of mutually incompatible, self‑contradictory, and amorphous ideas. Despite decades of internecine debate, the contemporary conservative movement in Western societies has failed, generally‑speaking, to provide a coherent and consistent account of itself. No viewpoint that, holus‑bolus, seeks to unite Barry Goldwater under the same banner as T. S.  Eliot could be otherwise. No „vital equilibrium” could ever be that vital.

What can be described as the current malformation of conservatism has been caused, in part, by its weak and problematic position vis‑à‑vis the modern world. The advance of left‑wing thought and  practice in modern society has compressed all competing „right‑wing” ideologies together, forcing what could be called the  „fusion” of nineteenth‑century liberalism with traditional  conservatism, such that distinctions between the two  have become  increasingly blurred.

This union of what were once two strongly distinct political philosophies is not only regarded as a necessary tactical alliance (as it well might be), but is increasingly meant to become a new theoretical and philosophical „synthesis”. Post‑war American conservatism in particular has been preoccupied with sometimes ingenious rationalizations of this new philosophical outlook. George Nash, for example, in his book The Conservative Intellectual Movement in America since 1945, divided post‑war American conservatism into three main groupings:   „traditionalists”, „fusionists”, and „libertarians”. Purely on the level of theory, „fusionism”, as a „shot‑gun marriage” between two once‑opposed positions, can be seen as difficult to justify. Yet, one could also question to what extent the establishment of „fusionism” as a touchstone idea has helped or hindered the disparate groups of the American Right.

Historically‑speaking, on the practical  and popular levels, much of the American „Old Right” was fiercely  individualistic, ultra-pro‑capitalist, anti‑étatiste, and radically freedom‑centred -‑ whereas in Continental Europe (and, to a lesser extent,  in Britain and Canada) what can be called the true „Old Right”  was its exact opposite ‑- community‑oriented, state‑centred, and  focussed on social and spiritual integration and harmony as the  unifying principles.

Virtually all works attempting to advance an acceptable new definition or program for conservatism have had to face this paradox of the two different conceptions of the „Old Right”.  The rigid Goldwater‑esque „rugged individualism” of much of the  American „Old Right”, its relentless assaults on „welfare‑statism”, were  probably its least appealing aspects, in terms of the over‑all  population, and failed in any case to win it any significant funding from  American big-business.

There certainly appears to be no possibility of turning back the clock to the supposedly conservative „Gilded Age”, that mythical era „before the New Deal”. And it is difficult to argue that the social conservatism of heartland America is in any way compatible with the free‑wheeling, free‑booting amorality of contemporary big‑city capitalism, to which most American conservatives seem to make at least a nod of approval. A modern government, it could be argued, will always be  „welfarist” and bureaucratic in administrative practice -‑ the  point is to be able to determine, in some measure at least, the  ideas and beliefs that are transmitted through the programs and  actions of that bureaucracy.

The over‑all situation of conservatism today is what might be described as „forced” ‑- without the luxury for doctrinal experimentation, lackadaisical stances, and weak commitment to core ideas and programs. It is extremely important for the future of conservatism, where, and how, conservatism’s lines of defence are drawn. The defence of capitalism and an atomistic individualism is, it could be argued, a weak position; the defence of society, of human social existence, community, and family, a strong position.

The only real hope for conservatism in the modern age lies, it would appear, in a contemporary re‑formulation of its social ethic, rather than in some rear‑guard defence of nineteenth‑century institutions and practices, such as laissez‑faire capitalism. What does cutting taxes mean anyway, if society as a whole becomes a seething cauldron of polyglot, polymorphous perversity? After all, so much of what traditional conservatives find troubling about late modernity — such as a libertine entertainment culture — is entirely unconnected to government bureaucracy and functions on a strictly free-market basis. This and the tech giants, as well as many large corporations, have frequently been characterized as together constituting “woke capitalism”.