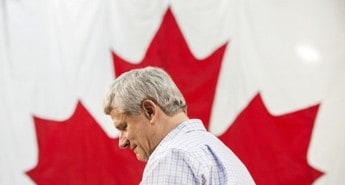 It could be argued that, over the last five decades, the Canadian Right has conclusively failed to articulate a “counter-ethic” to the now-prevalent “Liberal idea of Canada” and is now on the fast track to extinction in the Canadian polity. The origins of the decline of the Canadian Right can be traced to the battles from 1963 to 1968 between Liberal Prime Minister Lester Pearson and the staunch Tory John Diefenbaker (who was Prime Minister from 1957 to 1963), and the initial burst of “Trudeaumania” in 1968 to 1972. It was in those years that a more traditional Canada was fundamentally overturned, especially as symbolized by the adoption of the new flag, dubbed the “Pearson Pennant” – and the attendant, vast social engineering initiatives. The culmination of “the Trudeau revolution” was the Charter of Rights and Freedoms (1982). The social framework of Canada had been changed so drastically by that time, that Brian Mulroney’s Progressive Conservative majorities of 1984 and 1988 ended up being a “defeat in victory” – or a “false dawn.”

The Canadian Right tried to regroup through the launching of the Reform Party in 1987. The Reform Party faced a climate of unrelenting media and institutional hostility — especially in the 1996 controversy over the extension of anti-discrimination protections to gays and lesbians.

It could be argued that part of the Liberal Party’s strategy in the 1990s (in the wake of the collapse of Soviet Communism) to draw the sting of Reform Party criticism was to adopt so-called fiscal or economic conservatism. The extent of the Liberal austerity measures against the mass of ordinary Canadians included: not rescinding the Goods and Services Tax, as they had explicitly promised to do; the Unemployment Insurance reforms, which drastically reduced benefits; the Canada Pension Plan reforms which substantially raised the amount of contributions that have to be paid into the program; and the Old Age Pension and Old Age tax-exemption clawbacks – which kick in at a relatively modest income threshold. It could also be argued that the Liberal Party, especially in the 1990s, has colluded with big banks, big insurance companies, and other major corporations, to the disfavour of the broad Canadian public.

Preston Manning launched the United Alternative initiative in 1998. This culminated in the creation of the Canadian Alliance – whose full, official name was the Canadian Reform-Conservative Alliance. The initiative failed to achieve its ultimate goal – a merger with the federal Progressive Conservative party – largely because of the intransigence of one man – federal P.C. leader Joe Clark.

In 2000, Stockwell Day was selected leader of the Canadian Alliance. Although he began well, he was increasingly sandbagged by the accusation that he represented “Christian fundamentalist extremism.” The November 2000 election was full of various mendacious accusations and “dirty tricks” carried out by the Liberal Party. In 2001, Stockwell Day was essentially destroyed by a concerted campaign of the media, the Liberal Party, and dissidents in his own caucus. The ensuing Canadian Alliance leadership selection process of 2002 was won by Stephen Harper.

The merger between the Canadian Alliance (under Stephen Harper) and the federal Progressive Conservatives (under the leadership of Peter MacKay), was formally announced on October 16, 2003, and finalized by December 2003. This move, coming after decades of negativity for the Canadian Right, appeared to be a bright way forward.

In March 2004, Stephen Harper was selected leader of the reconstituted Conservative Party.

The June 2004 election was perhaps one of the most critical in Canadian history, and was supposed to represent the culmination of the Canadian Right’s attempt to regain the political initiative. Nevertheless, Stephen Harper essentially flopped – considering that the Liberals were highly vulnerable, especially over the financial scandal where over $100 million (Canadian) of federal government money went to the personal coffers of prominent Quebec Liberals.

In the October 2015 federal election, Justin Trudeau (Pierre Elliott Trudeau’s son) won a strong majority. This was a signal to sweep away whatever fragmentary conservative measures Stephen Harper might have been able to introduce in 2011-2015.

It could be argued that one of the central reasons for the continuing failure of the Canadian Right since the 1960s is the ongoing establishment of vast liberal-leaning media, juridical, academic, educational, bureaucratic, and corporate structures – a nexus of interests which some American and European critics have called “the managerial-therapeutic regime” – which could be characterized as socially liberal and economically conservative. There is also the fact that “North American” pop-culture is the primary “lived cultural reality” for most people in Canada, which tends to reinforce socially liberal, consumerist/consumptionist, and antinomian attitudes, especially among the young. Unlike in most other Western countries, where various countervailing factors of various kinds exist to the hegemony of the managerial-therapeutic regime, current-day Canada is probably an example of such a managerial-therapeutic system in its “purest” form. Some of these countervailing factors in the United States include such things as the far greater saliency of the military, the far greater presence of organized religion (both in regard to fundamentalist Protestants and traditionalist Catholics), homeschooling as a major social trend, the existence of probably hundreds of more traditional-leaning private colleges, and a large network of right-leaning think-tanks and publications – which together are part of what some have called the “Right Nation.”  At the same time, the United States has a more robust tradition of independent-minded, left-wing, anti-corporate, ecological, or agrarian dissent, such as that typified by Ralph Nader, Christopher Lasch, Rachel Carson, Helen and Scott Nearing, and Wendell Berry. It could be argued that social, political, cultural, and economic life in Canada – lacking, in fact, either an authentic Right or Left –has therefore become the least subject to popular will and democratic input, indeed, it could be called “post-democratic.” The lack of robust democratic participation and input in Canada should be of concern to theorists across the political spectrum. Insofar as the system maintains itself through massive “prior constraint” against a very broad array of ideas, beliefs, and opinions, its pretense to be upholding democracy is questionable. Such a profound lack of equilibrium is profoundly harmful to a more “ideal-typical” form and exercise of democracy.

Trying to continue to exist in such a context, the Canadian Right is probably on the fast track to extinction.

There are also a number of structural and cultural political problems in which the Canadian Right has been and is embroiled, most notably, their lack of appeal to Quebec. There is the long-term “Quebec problem” of the Canadian Right. There is also the lack of appeal to older immigrant groups (the so-called “white ethnics”) – who might have been a natural constituency for them. There is also their lack of appeal to newer immigrant groups (the so-called “visible minorities”) – although there is probably little they could do to increase their appeal there. The Canadian situation is markedly different than the situation in the United States, especially in regard to the extent of “minority conservatives” in both countries.

Because of the ongoing decline of conservative thought in Canada, there are only sporadic attempts to ever articulate a “counter-ethic” to the prevalent “Liberal idea of Canada.”  Such attempts are especially rare among currently-active conservative politicians.

There is clearly, furthermore, an astronomical inequality of financial resources as between left-liberals and substantive conservatives in Canada.

Given the direction of development of historical, social, cultural, and economic processes in Canada over the last five decades, and the various factors mentioned above – the incoherence of the articulation of a “counter-ethic”, the hardening of a once-robust parliamentary democracy into a “managerial-therapeutic regime,” the very low profile of any possibly competing countervalent power-centers such as the military and churches, the increasing centralization of the polity in the federal government, the prevalence of “North American” pop-culture with its amplification of socially-liberal, consumerist, and antinomian attitudes, and the various structural and cultural political problems for the Canadian Right — notably their lack of appeal to Quebec and “white ethnics”, and the fewness of “minority conservatives” in Canada  – it could be seen that the Canadian Right is approaching extinction in Canada. The future of Canadian politics is therefore very likely to move in the direction of a “post-democratic” and de facto “one-party” system – which will be overwhelmingly socially liberal and economically conservative.