One of the central reasons for the continuing failure of the Canadian Right since the 1960s is the ongoing establishment of vast liberal-leaning media, juridical, academic, educational, bureaucratic, and corporate structures – a nexus of interests which certain American and European critics have called “the managerial-therapeutic regime” – which could be characterized as socially liberal and economically conservative. There is also the fact that “North American” pop-culture is the primary “lived cultural reality” for most people in Canada, which tends to reinforce socially liberal, consumerist/consumptionist, and antinomian attitudes, especially among the young. Unlike in most other Western countries, where countervailing factors of various kinds exist to the hegemony of the managerial-therapeutic regime, current-day Canada is probably an example of such a managerial-therapeutic system in its “purest” form.

Some of these countervailing factors in the United States include such things as the far greater saliency of the military, the far greater presence of organized religion (both in regard to fundamentalist Protestants and traditionalist Catholics), homeschooling as a major social trend, the existence of probably hundreds of more traditional-leaning private colleges, and a large network of right-leaning think-tanks and publications – which together are part of what some have called the “Right Nation.”  At the same time, the United States has a more robust tradition of independent-minded, left-wing, anti-corporate, ecological, or agrarian dissent, such as that typified by Ralph Nader, Christopher Lasch, Rachel Carson, Helen and Scott Nearing, and Wendell Berry. 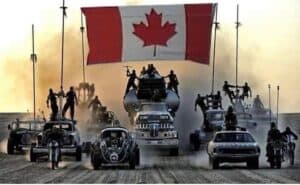 It could be argued that social, political, cultural, and economic life in Canada – lacking, in fact, either an authentic Right or Left — has therefore become the least subject to popular will and democratic input. Indeed, it could be called “post-democratic.” The lack of robust democratic participation and input in Canada should be of concern to theorists across the political spectrum. Insofar as the system maintains itself through massive “prior constraint” against a very broad array of ideas, beliefs, and opinions, its pretense to be upholding democracy is questionable. Such a profound lack of equilibrium is radically harmful to a more “ideal-typical” form and exercise of democracy.

It should be pointed out that Canada today may be seen as combining the most liberal aspects of America and Europe — indeed, it may be world’s most liberal society. Like some European countries such as the Netherlands, it is extremely socially-liberal, as demonstrated by the Canadian federal government’s total acceptance of same-sex marriage.  Although a vote on the issue took place in the Federal Parliament in 2005, it was with direct referral to the Canadian Supreme Court. What conservative critics call „judicial activism” is in Canada a comparatively late but now flourishing development, which only really got underway with the introduction of the Charter of Rights and Freedoms (1982) into the Canadian Constitution. The Charter, clearly a left-liberal rather than classical liberal document, essentially enshrined virtually the entire agenda of Pierre Elliott Trudeau (Canada’s left-leaning Liberal Prime Minister from 1968-1984, except for nine months in 1979-1980) as the highest law of the land. After Brian Mulroney’s huge Progressive Conservative majorities of 1984 and 1988 — whose record in regard to social and cultural conservatism was indeed abysmal — Canada’s federal Liberal Party (headed by Jean Chretien) comfortably won the elections of 1993, 1997, and 2000. Liberal Paul Martin, Jr., was reduced to a minority government (a plurality of seats in the House of Commons) in 2004. However, Stephen Harper’s Conservative governance in 2006-2015 tended towards centrism and moderation, despite the overheated rhetoric of his left-wing critics. This was partly due to the fact Harper held only a minority government in 2006-2011, failing to win a majority in the 2006 and 2008 elections. His majority government in 2011-2015 was also a disappointment for “small-c conservatives” and he in any case failed to break the pattern of the almost-inevitable return of the Liberals to power. Justin Trudeau (Pierre’s son) won a strong Liberal majority in 2015. Although he was reduced to a minority government in the 2019 and 2021 federal elections, he still comfortably governed, mainly with the support of the New Democratic Party (NDP), which is even further left.

On the other hand, unlike some European countries, Canada is characterized by very high rates of immigration, and it has whole-heartedly embraced multiculturalism, affirmative action (called „employment equity” in Canada), and diversity with a startling degree of unidirectional intensity. Canada’s official immigration numbers were for over three decades, more than twice as large as those of the United States — per capita — and are now probably among the highest in the world. With a population now reaching about 38 million persons, Canada had been receiving every year about a quarter-million immigrants. (The Liberals have recently raised the numbers to 300,000, and, in 2021 and coming years, to over 400,000 a year.)

At the same time, Canada has now embraced some of the more negative aspects of American society — such as the excesses of pop-culture, the trend to political-correctness, and growing litigiousness. However, it lacks many aspects of America that may temper the aforementioned trends. In Canada, for example, the government accounts for about half of the GDP. (In contrast to about forty percent in the United States.) Taxes are very high, relative to the United States. The Canadian medical system is stringently socialized to an extent unheard of in the United States. Canada’s gun control laws are also extremely strict. Unlike the United States, fundamentalist Christianity plays virtually no role in Canada. The debate about abortion and many other social issues is considered effectively closed. In another extreme contrast to the United States, Canada has virtually no military (the entire armed forces, including army, navy, air force, and reserves, number about 92,600 men and women) and there is major disdain throughout much of Canadian society (and especially in elite opinion) towards the military. Canada’s security provisions, refugee-policy, and control of its borders are also extremely lackadaisical.

Canadians appear to be characterized both today and in their earlier history by an unusual deference to governmental authority. Before 1965, Canada was probably a substantively more conservative society than the United States, but now, when the paradigm at the top has been fundamentally altered — in the wake of the Pierre „Trudeau revolution” — most Canadians are manifestly willing to follow the new, politically-correct line from Ottawa. There is virtually no heritage of independence, self-reliance, or belief in rambunctious free speech in Canada. Indeed, Canadian officials point proudly to their laws against „hate-speech” as highly necessary. They say they do not have „the American hang-ups” about restricting freedom of speech.

What may be concluded from the combination of points made above is that right-of-centre positions are rather rarely seen or heard in Canada (except perhaps in the Western Canadian provinces of Alberta and Saskatchewan). It could be argued that, given the left-liberal predominance in the Canadian media (especially in the taxpayer-funded CBC), in the education system (from daycare to universities), in the judiciary and justice system, in the government bureaucracies, in so-called high culture (typified by government-subsidized „CanLit”), in North American pop-culture and „youth culture,” in the big Canadian banks and corporations, and (on most issues) in the leaderships of the main churches in Canada, any existing right-of-centre tendencies are being continually ground down. There is also the panoply of special interest groups, who receive extensive government and corporate funding.

The social, political, and cultural situation of conservatives in Canada is desperate indeed.