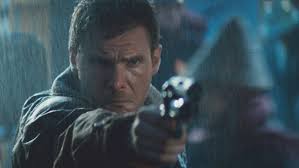 The cyberpunk subgenre typically focusses on a gritty future of planet-wide corporate rule and ecological disaster, where a lonely, somewhat dysfunctional hero tries to retain some measure of decency and humanity in a world dominated by vast impersonal forces – such as the frequently malevolent Artificial Intelligences (AIs) that lurk in cyberspace. Gibson’s Neuromancer indeed coined the term cyberspace, envisioning it as an electronic realm where the planet’s real power-struggles take place – in attempts to protect or steal data. Cyberpunk also focusses on relentless manipulation and alteration of the human and the natural through pharmacological, biological, electronic, and electromechanical means – indeed raising the question of what it means to be human in a world where human nature is apparently so malleable. It is the latter element that is the crux of Blade Runner.

The film is loosely based on Philip K. Dick’s Do Androids Dream of Electric Sheep? (1968), but, in the case of the movie, the deft changes from Dick have led to what is possibly an even greater artistic triumph. Some of the groundwork for this movie was laid in Ridley Scott’s Alien (1979) – which is also known for portraying a gritty, “lived-in” future. The screenplay for Blade Runner was written by Hampton Fancher and David Peoples, but Scott’s vision clearly animated the whole endeavour. This is a movie of the type for which the storyboards and pre-production sketches were later marketed as a published book and obtained a wide audience.

In the gritty future of the ecologically-wasted cityscape of Los Angeles (with its almost perpetual black rain), a down-on-his-luck policeman is forced to take one last assignment: to hunt down and kill a group of escaped “replicants”. (These assignments are carried out by so-called “Blade Runner” teams.) The replicants are very human-like biological constructs that are highly intelligent and physically superior in various ways (such as the ability to endure extreme temperatures) to human beings. They have a built-in lifespan of only four years.

As Deckard (played by Harrison Ford in one of his most profound roles), wanders the dystopian cityscape, deep questions are raised as to what could constitute the human in this kind of world. Politics and public engagement appear to have been swallowed up by the economic sphere and the mega-corporations.

One of the hugely attractive features of the movie is that it presents an entire cityscape /mediascape/soundscape of that gritty future – a future that definitively feels “lived-in”. Much of the ambience of the setting is delivered through the outstanding, mostly electronic- and synthesizer-based soundtrack by Vangelis. Some of the vistas shown in the movie are just amazing, such as the views of the megalopolis from the air – where one truly gets the feeling of gazing out at what some have termed the “air-conditioned nightmare” of the future.  The earliest cinematic precursor to Blade Runner is Fritz Lang’s Metropolis (1927), yet another movie that is acclaimed as a major classic.

It is possible to sense certain traditionalist/conservative subtexts in the movie. The fear of disastrous ecological transformation is certainly shared by serious traditionalists/conservatives as well as by ecological critics that are nominally left-wing. The attenuation of the public-political realm, and the apparent triumph of the polymorphous lifestyles of the hyper-urban cityscape, can certainly be seen as rather dystopian by more honest left-wingers, as well as by the traditionalist Right. Finally, a subtext more specific to the Right is the fear of the effects of mass immigration on the environment and cityscape.

A question that was running through my mind when I first saw the movie shortly after its initial release in 1982 was – what would a person like myself try to do, were I living in a world like that portrayed in the movie? Obviously, the situation for traditionalists/conservatives in that kind of world is far drastically worse than in the world today. I think the movie brought very clearly to mind the importance of the ecological discourse, and how what some have called “late capitalism” was probably one of the gravest dangers to traditionalism/conservatism. It also clearly demonstrated in my mind that those on the Left who criticize current-day capitalism as being some kind of vehicle for “white male” domination are hopelessly trapped in nineteenth-century perspectives. The current-day “late capitalism” clearly carries horrors that can be associated with the death of human nature, the death of meaningful politics, and the overwhelming of the world by technology — that easily dovetail with the polymorphous lifestyles and the anomic diversity of the hyper-urban cityscape – as opposed to what could be called genuine humanism and rooted diversity.

Whether the significant opposition to a world like that portrayed in Blade Runner emanates from the nominal Left or the nominal Right may not be all that important. Perhaps it can be agreed, upon a moment of reflection, that a world where there are “no nations, no borders” and “no religion too” – would likely be a dystopian nightmare dominated by trans-national corporations or inhuman bureaucracies – or some combination thereof.